Dreame - Claimed by the Duke

Add Innovel to the desktop to enjoy best novels.

These cookies are essential to the operation of our website. They are used for operations such as site navigation, image loading, information storage, status identification, etc.

These cookies are used to analyze and evaluate the performance of our website. The data collected with these cookies is aggregated for analysis and judgment, and ultimately used to improve the customer experience. 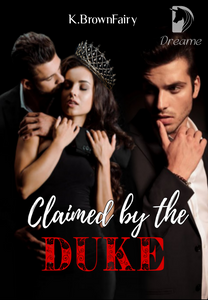 Claimed by the Duke

READING AGE 18+
K.BrownFairy
Romance
ABSTRACT
**ROYAL ROMANCE WRITING CONTEST** The Domineering Duke, the rebellious princess, one forced marriage A story of irresistible love, passion, and a forbidden romance. - Claimed By The Duke ♤♤♤ From being an ordinary girl to princess of Remington, it all happened too quick for Eleanor. But that wasn't the most surprising moment, but the decision of her marriage to Prince Harrison was. The Domineering Duke gave her no option but to be his wife and the future queen of Theroux. But her life gets complicated when she starts to like Kasper, one of the Duke's trusted man. When the marriage was inevitable, she's left shaking by her husband. He is a devil in suit. A beast in the shadow of dark. He always seeks what he wants, and he wants her. Will she fall for her husband or give into the attraction towards Kasper? ♤♤♤♤ "I can't do this, Princess " Kasper whispered in my ears, as his hands tried to slip away. But I held it tight pressed against my swollen n*****s as I looked at him in the eyes “Why not?” I questioned, it was clear we wanted each other. He was not only my protector, my bodyguard who was the reason for me being alive today. But Kasper was much more than I wanted to convince myself ,saying otherwise “It's not. It's my duty to protect you and your honor. Claiming you will ruin everything” His words felt harsh against my skin and I swallowed because he spoke the truth “Let it” I whispered “Prince Harrison will break the hell if he learns that his bride was touched before. And I Can't do this to him ,he trusted me to keep you safe. I owe him too much” Kasper Gritted out, angrily. And yet another truth. Prince Harrison, the man I was going to Wed. As per the tradition I must give myself to my husband, chosen by the royal house to save our kingdom. But I wanted Kasper, I had fallen in love with this man and choosing him will destroy not only my life but the entire kingdom of Remington leaving my heart broken. Because Prince Harrison, the soon-to-be crowning King of Theroux had set his eyes on me and declared to the world that I'll be his wife, the future queen.